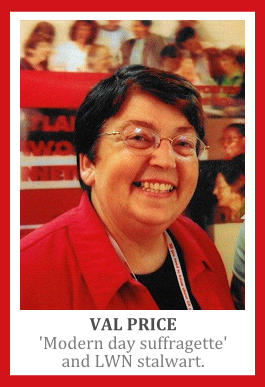 Val Price was a Labour activist and ‘modern day suffragette’. Her support for other women ranged from founding a hostel for battered wives in Slough to mentoring future MPs.

She joined the Labour Party in 1964 in Slough along with her husband, Fred, when Fenner Brockway – then MP for Slough – lost by eleven votes in the General Election. She remembered that moment in 2007 when writing for The New Statesman:

“We were horrified. He had been vilified by the local and national press through the Tories for his support of the anti-apartheid movement and his work with ethnic minorities.

That was why we joined the Party - so that as well as voting Labour which we had ever since we could vote at the age of 21, we could actually work for a Labour victory at the next General Election.”

According to her obituary in the Maidenhead Advertiser, in 1977 Val was a founder member of Slough Women’s Aid, a hostel for battered women and their children, helping establish two houses for use as hostels. She worked with it for seven years, on a 24 hour rota, taking phone calls and often going out at night to help women who had called her with no-one else to turn to.

Val was the National Co-ordinator of the Labour Women’s Network. She worked tirelessly over the years leading up to the 1997 election, and continued until her death, supporting and nurturing women in the Labour Party who were putting themselves forward for selection as parliamentary candidates and then for election as MPs. In her work for Labour Women’s Network and Emily’s List UK, Val provided advice, training and mentoring to women aspiring to enter the bear garden of politics at Westminster.

Hilary De Lyon’s tribute to Val on the Emily’s List UK website states: “Politics, community and family were central to Val Price. Her whole life was focused on making the world a better place, and there are few people who can look back on a life as selflessly lived as hers.”

Fiona Mactaggart, current MP for Slough, paid the following tribute to Val on her death from cancer: “Val helped me get selected by Slough Labour Party to stand as Slough’s MP. In the same selection she helped at least two other women too. That’s how she was, generous and truly committed to helping women in our party. She never grabbed the limelight, always pushed others in. She was wise and kind, and brave”.

Val Price was an inspiration to a whole generation of Labour women politicians. Her own words reflect the impact of committed, values-led political activism: “We really do have the ability to change people’s lives, and that is a very humbling experience” [New Statesman, 27 September 2007].