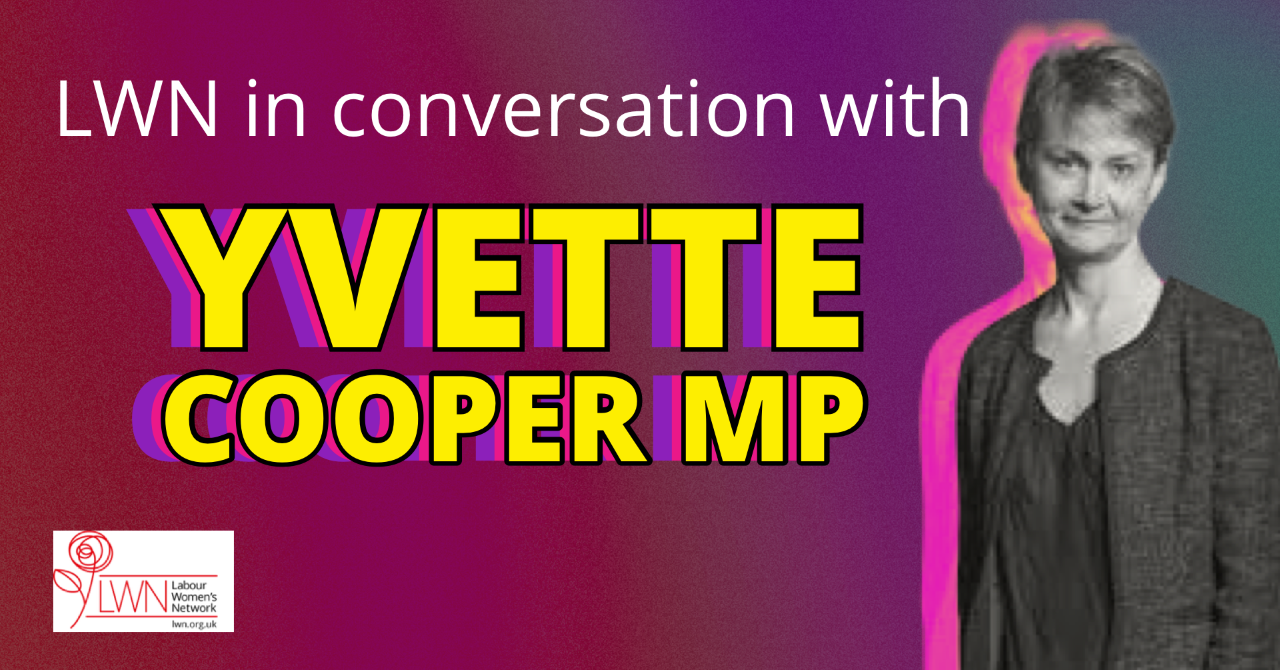 Join LWN for a evening with the one and only Yvette Cooper MP, on 21st March 2022 from 8pm till 9pm via Zoom.

Yvette will be talking with LWN Chair, Abena Oppong-Asare MP for what we are sure will be an interesting, lively and feminist conversation, to celebrate Women's History Month.

Rt Hon Yvette Cooper MP is one of the most eminent parliamentarians in the labour movement. Recently brought back to the frontbench in an emboldened Labour Party, Shadow Home Secretary Yvette is MP for Normanton, Pontefract and Castleford, having first been elected as part of the historic 101 women Labour MPs joining the House in 1997. We are thrilled to chat with her and welcome your questions as she celebrates 25 years in Parliament.

With an impressive ministerial career under Blair and Brown spanning multiple departments, Yvette was the first serving minister to take maternity leave, and the first women to serve as Chief Secretary to the Treasury. Her work as Chair of the Home Affairs Select Committee was characterised by groundbreaking work on refugees and violence against women. Yvette began her political career as a researcher for John Smith before going on to work for presidential nominee Bill Clinton, as a policy advisor to Harriet Harman MP, and later Chief Economics Correspondent of The Independent.

A proud feminist, Yvette is author of She Speaks: Women's Speeches that Changed the World, from Pankhurst to Greta, and has been known to moonlight as Sister Santa Claus at the legendary LWN festive party. Difficult as it is to believe after a quarter of a century as an MP, Yvette's journey to Parliament was as challenging as anyones, taking several attempts to get selected- a great example of persistence and resilience.

Don't miss this wonderful night as we explore the highs and lows of life in politics, what it was like to stand for Leader, her friendships across political divides, whether Labour are really in the game at the next election, and much more.

We expect all LWN events to be conducted in an atmosphere of sisterly respect. Abusive or inappropriate behaviour will not be tolerated and participants may be asked to leave.  No third party campaigning is allowed at our events.

We may record all or parts of the event to share on LWN website and social media, however this will be announced at the event and time will be given for you to amend your video or display settings should you wish.

Please be aware, we if you have signed up to this event but have unsubscribed or opted out of our emails, due to GDPR we are unable to communicate with you, and we cannot overwrite the system – Sorry!  You can sign-up again to give us permission to email you here.