Support Our Call For An Independent Process for Sexual Harassment Complaints 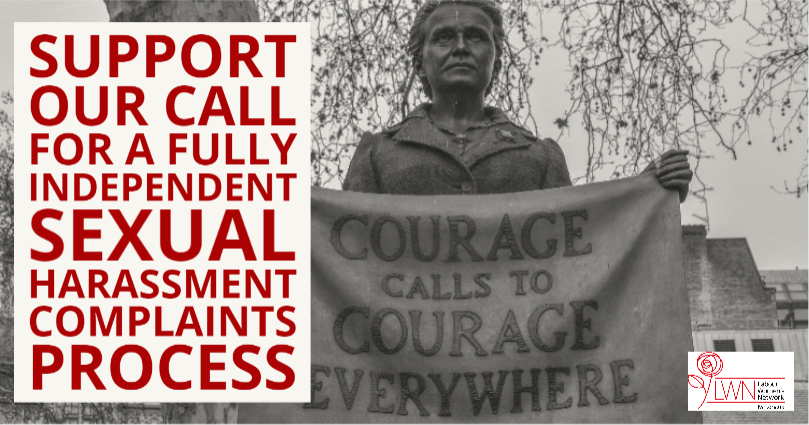 LWN has long campaigned for a wholly independent system for sexual harassment complaints within the Labour Party. The current system is subject to delays, leaks and politicisation and is failing Labour women. SO JOIN OUR CAMPAIGN AND SIGN OUR PETITION NOW!

So with your help, we want to show the Party that it has the backing of members, including male allies.

We tried to table a motion at Women's Conference in June, but as we feared, this motion was ruled out of order for Women’s Conference 2021 as they did not permit procedural discussions, though several delegates made calls for an independent process and greater action on sexual harassment. We must keep up the momentum. Sign, share of social media to show your support by contacting David Evans, Keir Starmer and your local labour representative

We have TWO Calls To Action;

2) Get your CLP Or Women's Branch to Show Their Support
Take our petition to your CLP or Branch to show support, and then contact David Evans, General Secretary of the Labour Party, Sir Keir Starmer MP, Leader of the Labour Party and your local Labour representative (please copy us in at [email protected])

You can read the petition text below, or download it here and support it as an individual member.

You can catch-up on how LWN has been leading the charge on this for a number of years here.

Below is the petition - please lend your support to this important issue, and ask your CLP to support the motion too.

1) The Labour Party has a widespread problem with sexual harassment, from its grassroots up, evidenced by the 2017 LabourToo report which detailed 43 case studies of harassment, assault and abuse

3) The complaints process is subject to unacceptable delays and leaks, with suspensions unusual and expulsions exceptionally rare

5) In March 2020, Keir Starmer committed in writing to an independent complaints process for sexual harassment complaints

6) Women are not safe as Labour activists, staff or elected officials

7) Successive Leaders, General Secretaries and National Executive Committees have failed to address this to any effect

9) As Labour women we are submitting it anyway, because enough is enough. We urge Women’s Conference Arrangements Committee to acknowledge the urgency of this debate.

1) The recommendations of the Monaghan report be published and implemented

2) The elected, factional and political National Constitutional Committee and National Executive Committee should have no role in arbitrating sexual harassment complaints