Over the last century thousands of women have made tremendous contributions to both the Labour Party and the role of women in politics. On this page we celebrate just a few of them. 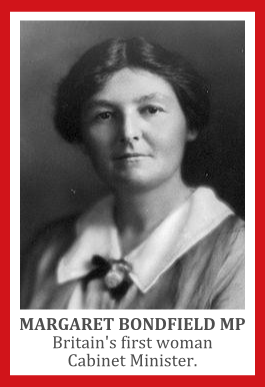 In 1929, Margaret Bondfield, MP for Northampton, because the first woman British Cabinet minister. Her service as Minister of Labour in Ramsay MacDonald’s National Government topped a long career in the industrial wing of the Labour movement.

As a teenage shop-worker in Brighton, she became an active feminist and in 1894 she began agitating in the Shop Workers’ Union, later rising to become its Assistant General Secretary. She formed the first all-female trade union (the National Federation of Women Workers) and at the TUC Conference of 1899, she seconded the resolution to set up the LRC, the forerunner of the modern Labour Party. Later she was to serve as the first woman member of the TUC executive and the first female President of the TUC’s General Council.

Find out more about Margaret, and other great trade union women, here. 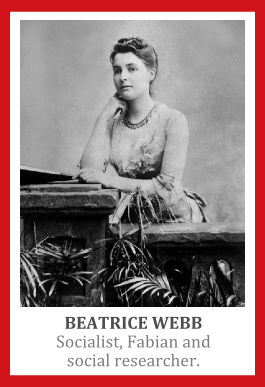 She firmly believed that the triumph of socialism would be in large part be a victory of ideas and she has left an enduring intellectual legacy as one of the co-founders of the London School of Economics and New Statesman magazine.

As the author of several radical books and social surveys she earned a reputation as a thinker on industrial policy, co-operative economics and poverty, but is perhaps most famous of all for her Minority Report to the Royal Commission on the Poor Laws and Relief of Distress, established by the then Conservative Government.

Writing about her seminal study 100 years after its publication, Gordon Brown said “sometimes ideas are more than simple passing notions – some are insurrections in the human imagination, ways of looking at the world which once unleashed mean society can never be the same again. So it was with Beatrice Webb’s 1909 Minority Report to the Royal Commission on the Poor. The report was a landmark moment in the history of political ideas; the first call for not just the abolition of the workhouse but for its replacement with a modern welfare state and national health service.”

Beatrice’s report argued for a living wage and collective provision of health care, benefits for the sick and old and good training and nourishment for children and young people. William Beveridge was her researcher during the process and many of the original ideas and argument from Beatrice’s report found their way into his own blueprint for the modern welfare state several decades later.

Beatrice may never have become an MP, but the ideas she first published at the beginning of the last century informed many of the great Labour successes we had in the Governments to follow.

Find out more about the Fabian Society here. 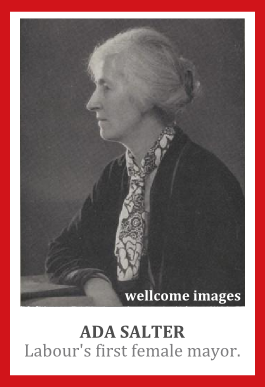 Bermondsey’s Ada Salter was a pioneer of municipal socialism. She was the very first female councillor in London and the first Labour woman mayor in the British Isles. She was politicised by her work in on ‘the Missions’, where she and her husband Alfred lived among Bermondsey’s working class and provided free health care to the families of the slums.

Originally she and her husband Alfred (later Bermondsey’s radical MP) were liberals but in 1908 they joined the ILP and started busily recruiting members. Within a year Ada had been elected to the council – the first ever woman elected to London local government.

After defeat in 1912, and a difficult war during which her pacifism was vilified, Ada was re-elected to Bermondsey Council in 1919 and became its Mayor in 1922. In so doing, she became the first female Labour mayor in Britain – and a frenetic campaigner for child and maternal health.

With elevation to the London County Council in 1925, she was able to pursue a successful campaign to introduce a green belt and fought ferociously to protect workers’ access to green spaces.

You can find out more about the Salters’ pioneering community work here.